Thanksgiving has always been my favorite holiday.  OK, maybe not always, but for a long time anyway.  It was the only time of year when the majority of my family made a coordinated effort to actually all get together at the same time.  Not everyone makes it, but it’s usually a pretty good crowd.  We eat, watch football, pie, football, turkey sandwiches, pie, more pie, football.  Nothing dramatic usually happens, it’s just good to spend a day with family without any pressures.  Friday is a bit of a different tradition, and it has changed quite a bit over the years.  Some do some shopping, work occasionally interrupts, but in the end the majority of us will spend a good chunk of time together eating leftovers.

The last few years, however, there’s been this looming cloud known as Black Friday trying to disrupt this holiday.  It started off really simply, offer good deals the day after Thanksgiving to get people to kick off their Christmas shopping.  Competition grew, the deals became more attractive, more people joined in, and the next thing you know it’s come closer to resembling Pamplona than a fun family festivity.  Waking up at 4am, fights, people getting crushed waiting for the doors to open and for what?  A $99 off-brand 19 inch LCD TV and a $5 blu-ray of X-Men 2.

Yes, I’ll admit, I’ve gone to stores on Black Friday before, but never as an “active participant”.  It’s just not my thing.  Some people enjoy it, that’s fine.  I don’t.  I’d rather just scan the web and find slightly better deals and far less elbows to the face, but that’s just me.  I have no real problem with people who want to do this.  I find it enjoyable sometimes to watch the news coverage of the carnage and the long lines of people waiting for doors to open.  The worse the weather, the better.  The problem I have, is how it’s slowly been moving to earlier and earlier times.

It’s started benign enough.  A person here or there decides to call the Thanksgiving day festivities short so they can get to sleep in time to wake up rested for the 8am door busters…then 7am…then 6am…  The new trend is a bit more intrusive.  “Maybe if we open at midnight, we can rope in a few more shoppers”, “If people would come out at midnight, certainly they’d come out at 10pm on Thanksgiving Day”, and now “people are bored with their families by 6pm anyway, so let’s just open then!”  How early will people be willing to line up on Thanksgiving day for a 6pm doorbuster? 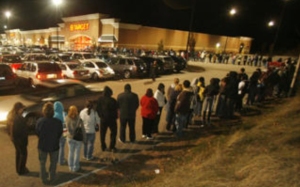 In a way it could be good.  People will now be forced to prioritize their family time vs. their consumerism.  Hopefully some people will realize that it just isn’t worth it and perhaps the trend will fail as Americans jointly choose family over extended debt limits.  Unfortunately, though, I know better.  There will be some, if not many, that choose to fall prey to the calling of the deal gods.  Next year, expect earlier times and bigger deals.  Unless people actively commit to staying home, it will only continue to spiral downward until Thanksgiving becomes nothing more than a nationwide shopping day.  The truth is, it’s not about the deals anyway.  There isn’t a single deal that can’t be matched or beaten online.  Football, bite of pie, and an Amazon search sounds much more family friendly to me.

Now, on your mark…get set…prioritize!