My view of 2013 was fairly limited as, in all honesty, I really don’t get out much and when I do get out, it usually revolves around the interest of the kids instead of my own.  That said, however, I still had some pretty good experiences in 2013 so I thought it’s only proper that I compile a list and throw it into the pit of countless other mediocre “best of” lists.   Here we go, get ready to have your mind BLOWN.

Movie of the Year:  DESPICABLE ME 2

This seems to be a popular category, so lets start with that.  I didn’t make it out to the theater much this year and much of what I watched on TV was a mix of fairly unbearable children’s programing courtesy of Netflix.  I did, however really love this movie.  Very enjoyable for absolutely all ages without pandering to any.
Qualifier: I believe I only saw one movie released in 2013 that had actual “real” people, therefore Sharknado scores an honorable mention.

Game of the Year:  TOMB RAIDER

I actually played quite a few games in 2013, though very few that were actually released in 2013. Had I played everything, though, I’m quite confident Tomb Raider would still be in my top 5 at least, as it was a fantastic game.  It had everything I love in a game, story, adventure, collecting, and, of course, brutal cut scenes.
Qualifier: I have yet to play what apparently the rest of the world has determined as the 2013 game of the year, so until I play The Last of Us, feel free to add an asterix by my pick.

Seriously, what did you expect me to put here? But what isn’t to love about this book? Not one but four…FOUR stories, fantastic writing, unrivaled cover art, great illustrations (aw shucks), you’ll laugh, you’ll cry…you’ll buy it hopefully.
Qualifier: I may or may not have had a hand in the creation of this book and the aforementioned illustrations and cover art…plus, I may or may not have seen the author sans clothing. 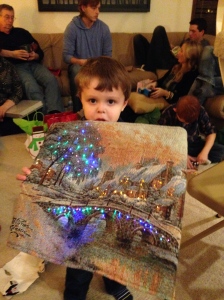